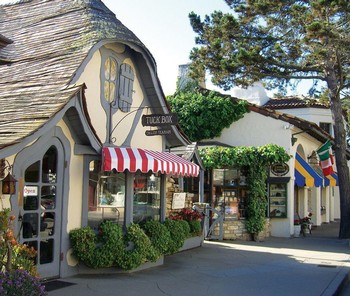 Once upon a time, in the year 1924 BC (Before COVID-19), 31-year old Hugh Comstock, journeyed from his Santa Rosa home to visit his sister living in Carmel on the Central Coast. Little could Comstock have realized the future repercussions of that fateful trek when he met his wife, Mayotta, who persuaded the novice builder to construct a custom bungalow to showcase her rag doll collection.

That now historical 244-square-foot gingerbread cottage, dubbed Hansel, would become the blueprint for its sister cottage, Gretel, built the next year, followed by 19 additional similar-style creations during a five-year period for local residents charmed by the gingerbread house design.

Of these remaining 21 Comstock originals in what is now officially known as Carmel-by-the-Sea, most are personal residences, aside from those used as a restaurant (Tuck Box), English-style candy store (Cottage of Sweets) or a B&B (Normandy Inn).

Regardless of purpose, they all play a role in characterizing this quaint hamlet that was once home to such luminaries as photographer Ansel Adams, authors Robert Louis Stevenson and Sinclair Lewis, and screen legends Doris Day 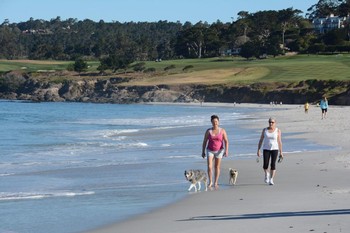 and Clint Eastwood, who, after being elected the town’s mayor in 1986, immediately tossed out a 60-year zoning law banning the sale of ice cream cones. Now, that’s how to make someone’s day!

A week before COVID-19 melted away all my travel plans, I took the two-and-a-half-hour drive from my North Bay home to the European-style village sandwiched between the posh enclave of Pebble Beach’s multi-million McMansions to the north and the pictorial coastal landscape to the south with Point Lobos and Big Sur. While this was far from my first rodeo in Carmel-by-the-Sea, every visit unveils new experiences and my initial encounter this time did not disappoint.

My arrival to town was perfectly timed with the daily complimentary wine and cheese happy hour at my home away from home, The Hideaway, which, by name alone, justified General Manager Chris Whitman’s claim as Carmel’s 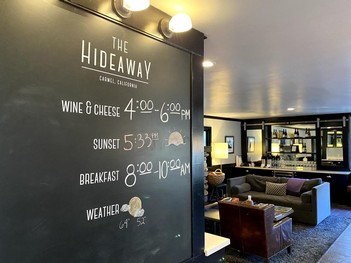 “best-kept secret.” With its old charm aura blended with new amenities (double-sided fireplace in my room was a nice touch), this renovated boutique hotel on a quiet street was an ideal respite located a two-minute walk from the primary commerce drag of Ocean Ave.

It was soon thereafter that I recalled what sadly-missed celebrity chef and travel documentarian, Anthony Bourdain, once said, “Your body is not a temple, it’s an amusement park. Enjoy the ride.”

Which was exactly what I did when I sat down at Cultura Comida y Bebida, a cozy restaurant tucked in a downtown alcove serving Oaxacan-inspired dishes. As a rookie to this type of fare, I received quite an exotic introduction. Until that moment, I had never knowingly chowed down an 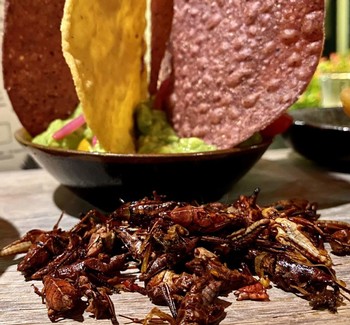 insect of any size but after the server convinced me of a chapuline’s (grasshopper) protein-rich nutritional value, I was sold. Besides, I felt comforted knowing there was plenty of Mezcal on standby!

For first-time visitors, it doesn’t take long to recognize Carmel-by-the-Sea opens a multitude of doors to unique discoveries. With a population of just under 4,000, every year more than 2 million visitors squeeze into a compact area (one-square mile in size) jammed packed with a maze of nooks and crannies that will boost your Fitbit meter exploring charming courtyards, more than 100 art studios, galleries and antique stores, a glutted menu of restaurants and bistros, a fashionable potpourri of boutique shops, and a double-digit (19) collection of wine tasting rooms representing Monterey County vintners.

Depending on consumption, your total step’s tally may depreciate but the good news is the freedom to research however many you’d like and not having to get behind the steering wheel. Park the car once and you’re good to go.

Typically, my exploring strategy starts at the corner of Ocean Avenue and Junipero Street, where the shop browsing begins, then continue heading downhill to the white sands of Carmel Beach, where all canines (and humans) are free to roam unleashed, a liberty that can be traced back to when actress Day became co-owner (mid-1980s) of the Cypress Inn and made it a pet-friendly hotel. Through the years, a number of local lodgings followed suit turning Carmel into one of the Fido-friendliest towns in America. Now, many downtown establishments attract man’s best friends with water bowls at their front doors, hoping, perhaps, to lure their masters inside.

From Italian to Mexican to Asian, most any regional cuisine is available in town, however, to score the real intelligence on Carmel-by-the-Sea, grab a barstool and glass at any of the local wine tasting rooms where conversations with the host can take more twists and turns than a politician. Rest assured, my civic interest was concerned more with the local Cabs and Pinots.

At Galante Vineyards, decked out in a Western motif, I became very content doing a lot more listening than speaking to Rick, the affable wine tender, while his pours became increasingly liberal and being educated on owner Jack 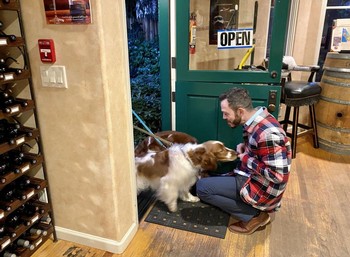 Galante’s great-grandfather, J. Frank Devendorf, becoming the “Father” of Carmel-by-the-Sea after co-founding (with his partner, Frank Powers) the town in 1900.

Regrettably, my history lesson was abruptly interrupted when Rick felt compelled to offer some treats stashed away from Diggity Dogs to a friendly pup showing up at the front door.

Keeping my wine sampling all in the family, the next stop on my vintage parade was Dawn’s Dream Winery, run by Galante’s wife, and after testing their award-winning Chardonnay, Rosé, and Pinot Noir, I suddenly found myself relaxing in the waterless copper clawfoot bathtub used as a showpiece in her tasting room.

Whether day-dreaming in a tub or unplugging on the beach while being mesmerized by the setting sun, this seaside community in the forest serves as an essential and surreal escape where daily tribulations just seem to fade away.

Being without my pooch on this excursion, I was forced to depend on my sniffer to detect eatable treats. Not a problem. As quickly as I turned the corner from The Hideaway, the early morning sweet yeasty scent emanating from the bakery at Rise + Roam caught me hook, line, and sinker.

And the clincher was discovering it doubles as a pizzeria so, as the saying goes, “When in Rome,” I knew immediately where I was returning for dinner. The newly-opened restaurant from the owners of Folktale Winery features chefs Todd Fisher (also opened the exclusive steak house, Seventh & Dolores, in downtown Carmel) and chef Aaron Raynor (aka, Chief Dough Dude) dishing up the fast-trending roman style pizza, served by the meter on wooden paddles.

Commenting has been turned off.